Acca of the Day | Looking for Many Goals!

Howdy, fellow tipsters! Another close shot with the Acca of the Day is behind us as we hit two winners. Belgium was confident against the Czech Republic, while Bari celebrated an easy win against FC Monterosi. However, we searched for a bit higher odds on the Rwanda vs Kenya game. Instead of the Under, we went with BTTS No, and that was the wrong call as the game ended 1:1. For this occasion, we will focus on the goals markets:

The hosts opened the new campaign with an away victory over Hellas Verona, but they picked up just a point from the following two games. Sassuolo was very close to a draw against Roma at Stadio Olimpico, but they conceded on the stoppage time. Filip Djuricic and the lads don’t give up on the attacking style, but they allow many goals.

Torino had a disappointing campaign, and the start of the new one is not much better. They opened the season with two straight defeats but bounced back with a win last weekend. The visitors were confident in a 4:0 victory over Salernitana, and it was the only match where they kept the clean sheet. When these two sides face each other, the crowd can enjoy many goals. Their last seven encounters went BTTS Yes, and this one shouldn’t be much different.

Click here to register at BetInAsia, get the best odds, and place a bet! Enjoy the world’s best betting brokerage platform, sign up, and boost your payouts with the best odds on the market!

Almere missed a chance to win a promotion last season, although they were very close. However, they are not happy with the start of the new campaign. The hosts sit in 12th place, but they have managed to improve their form lately. Almere’s defending is not good, and they need to improve that.

Jong Ajax trashed Breda in a 6:3 victory last Monday, but that was their second win in the campaign. They are two points behind their upcoming rivals, and the visitors have been involved in many efficient matches. Their opening round match stayed under a 2.5 margin, but we saw at least three goals in all others. Therefore, we expect them to continue the streak and provide fireworks again.

Lyngby wants to bounce back to the Danish top flight, and they are on a good track to accomplishing that. Freyr Alexandersson’s side is four points behind the top spot but has one game in hand. The hosts are the most efficient team in the league with 21 goals scored, but they need to do better in the back.

On the other hand, Koge is in early trouble. The visitors collected just five points and only one on the previous five occasions. They are among the most inefficient teams, while they have allowed 16 goals so far. Koge tied three defeats on the road, and they don’t have good chances on this trip. Lyngby should meet the expectations and deliver a win.

BTTS Yes in Sassuolo vs Torino

Over 2.5 FT in Almere vs Jong Ajax

Lyngby to Win vs Koge 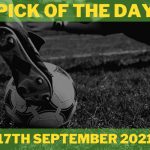 Pick of the Day | Buducnost to Get Back in the Title Race!

Acca of the Day | Dipping into the Over 2.5 Markets!