Acca of the Day | European Conference League Dominates the Offer!

Howdy, fellow tipsters! We were pretty close to snatching a winner treble yesterday, but Junior’s second-half performance ruined our 7+ odds. Flamengo celebrated a narrow 1:0 win away to Defensa y Justicia, while River Plate and Argentinos Juniors drew 1:1. It’s the European continental cups quals season, so we picked three matches from the European Conference League for today:

KuPS is doing very well in the Finnish Veikkausliga as they sit in 2nd place. They enjoy an excellent form in the domestic competition, as they booked six straight victories. However, they are currently down in this tie, as the Finnish side lost in Armenia 1:0. Although they are not too productive in the front, KuPS is pretty tough to crack. They need to continue a positive run to secure a place in the second round.

Noah suffered two straight defeats at the end of the domestic campaign and slipped down to the 2nd spot. They had some troubles on the road in the Armenian Premier League, and they now head to the international trip. Although Noah has the first-leg advantage, they need to put very disciplined performance to keep it intact. We believe KuPS can turn around the aggregate result and celebrate by at least two goals. You could also try KuPS & BTTS No.

Laci is one goal down in this tie, as they lost in Podgorica 1:0. It was a pretty boring game that could end in a goalless draw if it were not a second-half penalty kick for the Montenegrin side. Nevertheless, Laci had an opportunity to equalize from the spot deep into the stoppage time, but they missed it. The Albanian team has been having trouble converting their chances into goals lately, as they netted just once on the last five occasions.

FK Podgorica had a successful domestic campaign, as they secured continental qualification by finishing 4th. Vladimir Boljevic and the lads will look forward to defending their first-leg advantage and progress further. Their away games have been pretty tight, and we usually couldn’t see more than two goals. We expect another low-scoring match and two goals in total at most. The odds seem pretty generous for this market.

Spartak Trnava failed in the first-leg game in Malta, and they suffered a 3:2 defeat. It was one of the biggest surprises in that round, as the Slovakian side is projected to go far in these quals. Michal Gasparik’s side should not fall into the same trap of complacency now, and we expect them to show a much better display.

Mosta FC finished its campaign as 6th, but a good Maltese Cup performance secured them a place in the ECL Quals. They celebrated an unexpected victory at home but will have a challenging task to keep it intact. Mosta hasn’t been too tight in the back, and Spartak Trnava could exploit that. We think the Slovakian side should be pretty confident here and could celebrate by at least two goals.

Place a €10 wager on Spartak Trnava AH -2 at MELbet, and you will get €30 in FREE bets! Sign up HERE, and make sure to enter the BATBET1 promo code!

Under 2.5 FT in Laci vs FK Podgorica 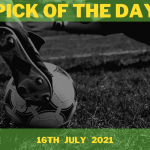 Pick of the Day | Cukaricki to Open a New Campaign!